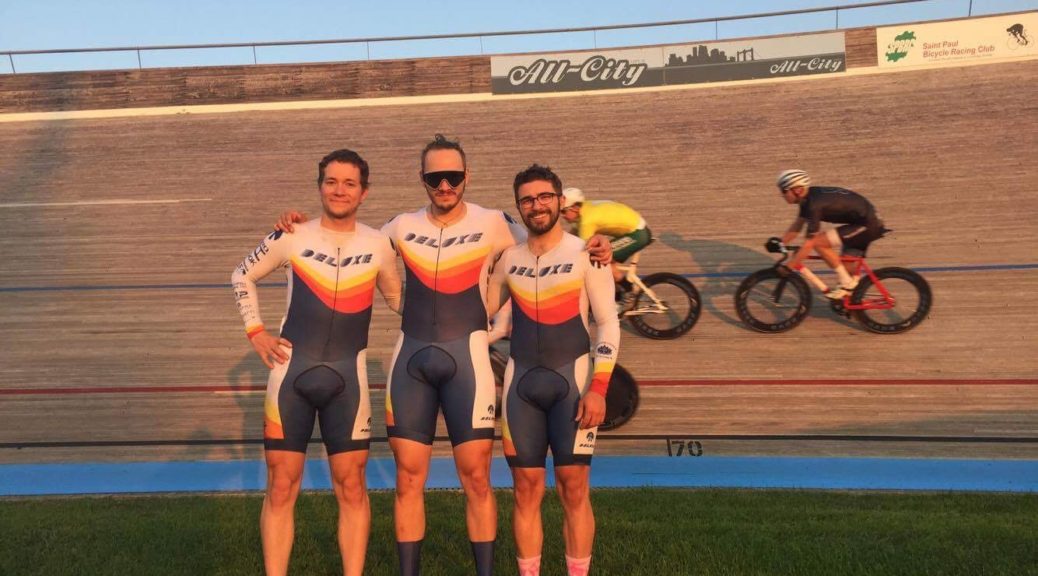 The Deluxe Cycles Racing track boys just spent the weekend up in Minnesota at the NSC Velodrome for their annual Fixed Gear Classic race event to race against the nations top track racers.

Minnesota has a very unique track with a lot of character. It’s an outdoor wooden 250m that’s been around for about 30 years. Over time some of the wood has rotted, but the community put the time and elbow grease into replacing any spent boards. The banks reach a peak of 43º and are a total blast to race on.

Mark and BJ took part in the Sprint events, while Jesse raced in the endurance omnium. Mark took 3rd in the match sprints and BJ snagged 6th overall in the Keirins after winning his qualifier. Jesse didn’t place well in his events, but took second in the backward Longest Lap after nearly crashing out into another rider. The racing was extremely high level, and an honor to be a part of. The Endurance omnium filled up to the tracks max capacity of 24 in nearly every race and had multiple huge breaks, defensive chasing, and lots of high caliber tactics. Here are some fun photos from the racing!

People came from all over to be part of it all including San Fransisco, Indiana, and BC Canada! It was a great time getting to make new friends from all over; it really felt like bike racing sleep away camp.

We’d like to really thank Bob, Linsey, and everyone else from the NSC Velodrome for everything they did for our riders to help them come and race which including helping financially, picking up and dropping off to and from the airport, and providing dorm rooms just 20 meters from the track! Truly an impressive program you guys run and we couldn’t be more humbled to be a part of it.